We at Wavergy have created a proprietary patent-pending design which, via mimicking a molecular lattice structure as found in nature, naturally and effortlessly captures the kinetic motion of ocean waves and transforms it into usable clean, green energy, all the while dampening the very destructive nature of the waves themselves. Ours is a modular, custom-configurable design with a crystalline-like structure which, via rotation at the various and numerous connection points, flows like a two-layered blanket over the ocean surface, generating electricity through gear multiplication of that rotational motion captured. Universal joints with three degrees of rotational freedom allow the capture of all incident wave content while easily rolling through wave motion in transverse directions.  This movement at the joints naturally produces a consistent form of energy that is highly predictable, up to 48 hours in advance, and never ending. The very lattice structure we are employing naturally endows our device with inherent strength due to its many lattice connection points, and therefore multiple redundancy - allowing it to survive, and thrive, in the most extreme of conditions. We find these lattice structures in nature in the molecular configurations of materials such as Steel and Aluminum each with a particular molecular lattice arrangement which lends these materials their inherent strengths.  By mimicking these arrangements and allowing for rotation at the connecting points we have created a modular solution that is easily expandable per a client's needs and importantly densely arranged such that no wave energy passes without being absorbed by the modules themselves. Survivability and resiliency is a key issue in this industry.  As is illustrated, this strength is baked right into our design.  Rather than singular high-cost devices, sparsely arranged and arrayed, ours is a solution that collects energy at a multiplicity of joint locations, via a multiplicity of lower cost modules, sums it, and sends it to shore via undersea cables.  Each array is tethered to the ocean bottom allowing it to naturally direction itself into the high energy oncoming incident waves.

By having an arrangement of offset arrays as shown in the picture at top, one can decrease wave amplitudes, via its reef-like structure, in essentially quantized steps of decreased energy, as subsequent lower intensity waves reach each following array of grouped modules.  In this way we have a gradual, stepped-down decrease in destructive wave energy, all the while pulling that wave energy out of the waves, utilizing it, and converting it into useful, clean green electricity.  Our device works in tandem with other coastal on-shore storm mitigation solutions to produce a maximum protective effect for coastal populations, municipalities, infrastructure and precious environmental resources.

The environmental impact of our design, is near zero, per international research on the impact of wave energy converters such as ours* (see reference link below), with even some potential marine life benefits as our design acts like an artificial reef at sea, friendly to sea life in its surrounds.  This low environmental impact, low visual pollution solution makes it ideal for the coastlines of busy metropolitan municipalities, looking to protect its infrastructure and provide cheap, abundant energy to its constituencies, as well as for far out at sea, where massive energy generation can occur via virtually endless arrays of the highly productive, highly efficient modular lattice wave energy converters that we have designed.  Unlike other wave energy converters which only convert the vertical heave motions of ocean waves into energy, our device captures energy by sweeping along the entire orbital path of an ocean wave, therefore making it a highly efficient and highly energy-dense green ocean wave energy capturing device as compared to others.

*ANNEX IV 2016 State of the Science Report: ENVIRONMENTAL EFFECTS OF MARINE RENEWABLE ENERGY DEVELOPMENT AROUND THE WORLD.  A report prepared by Pacific Northwest National Laboratory on behalf of the U.S. Department of Energy 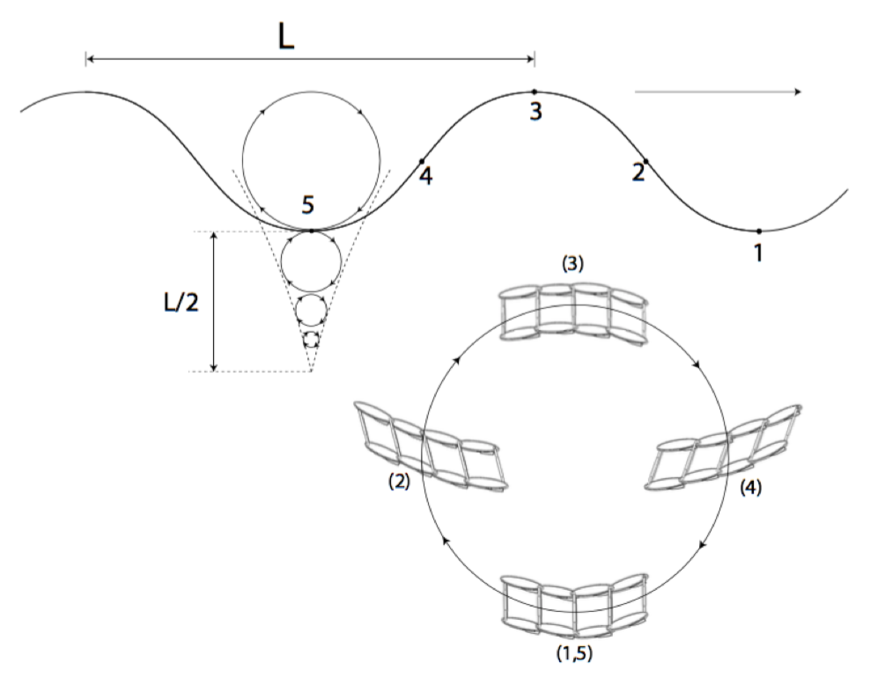 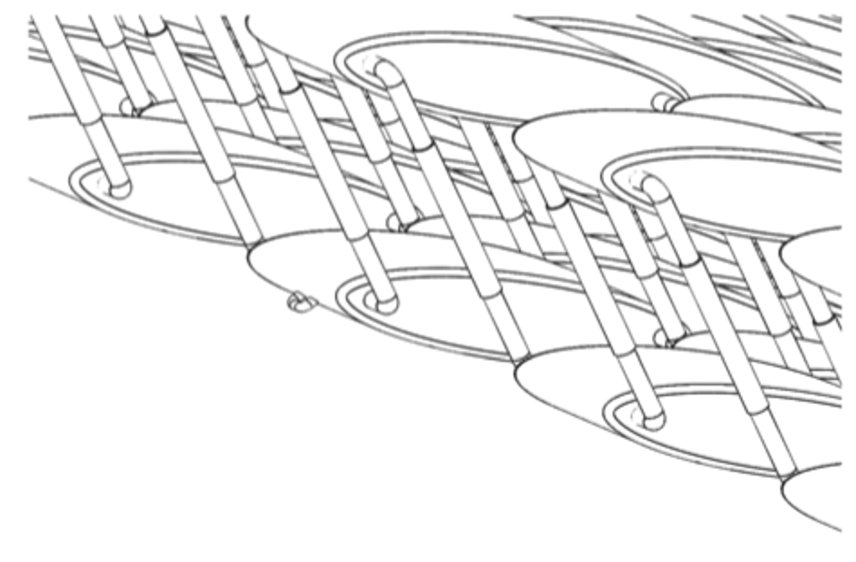 Thus, ocean wave energy is proportional to the square of wave height. 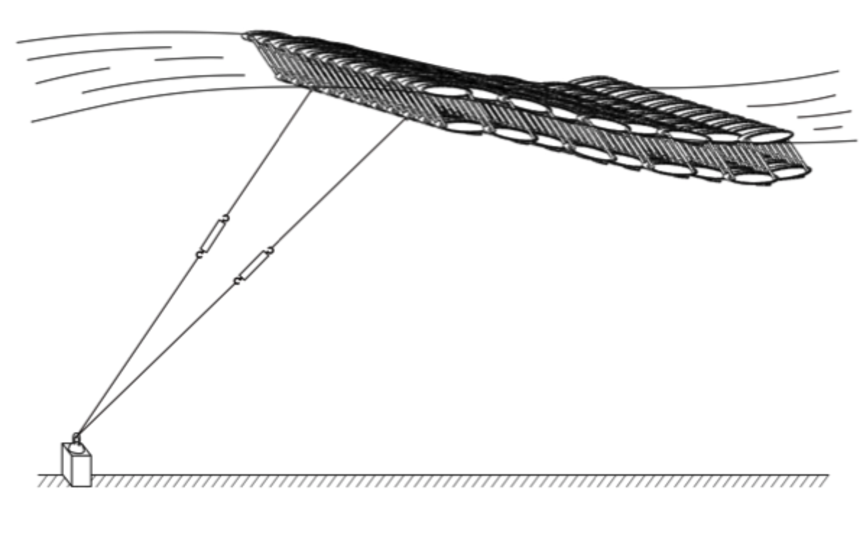 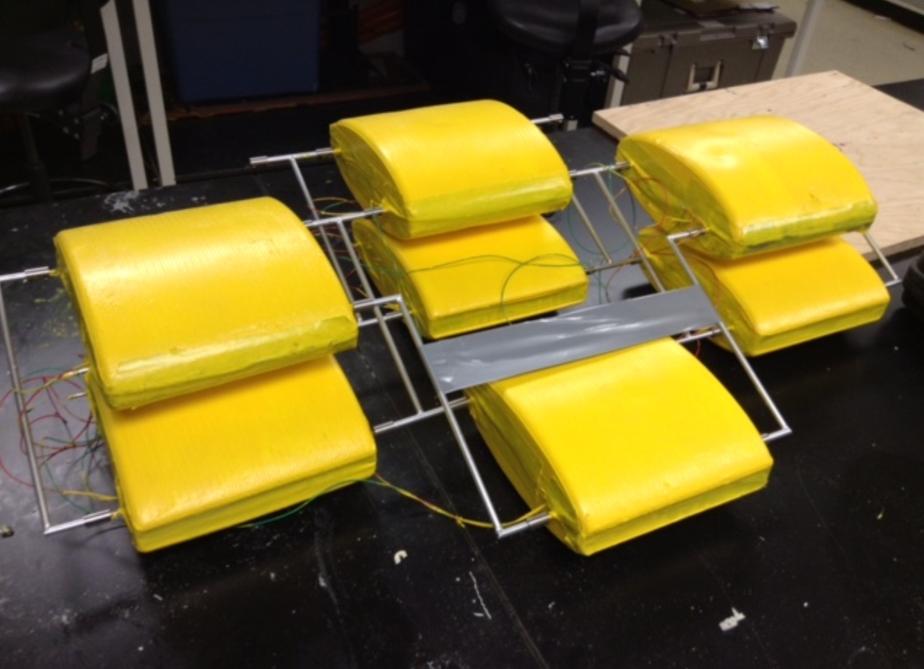 Wave energy is particularly dependent on wave height.  The total energy (E) available in a unique propagating ocean wave, combining both kinetic and potential energy available is calculated as: 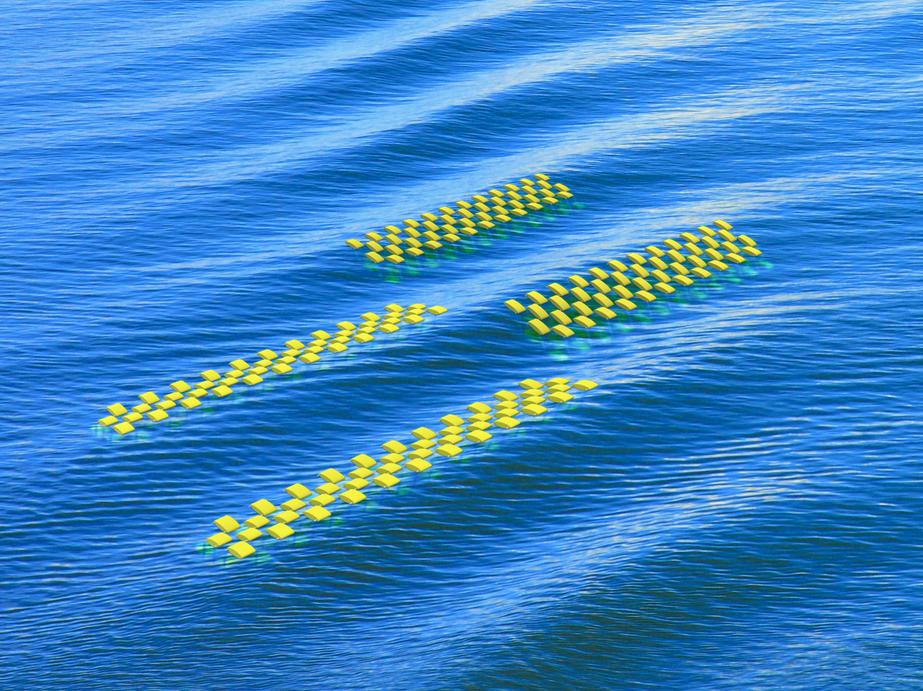 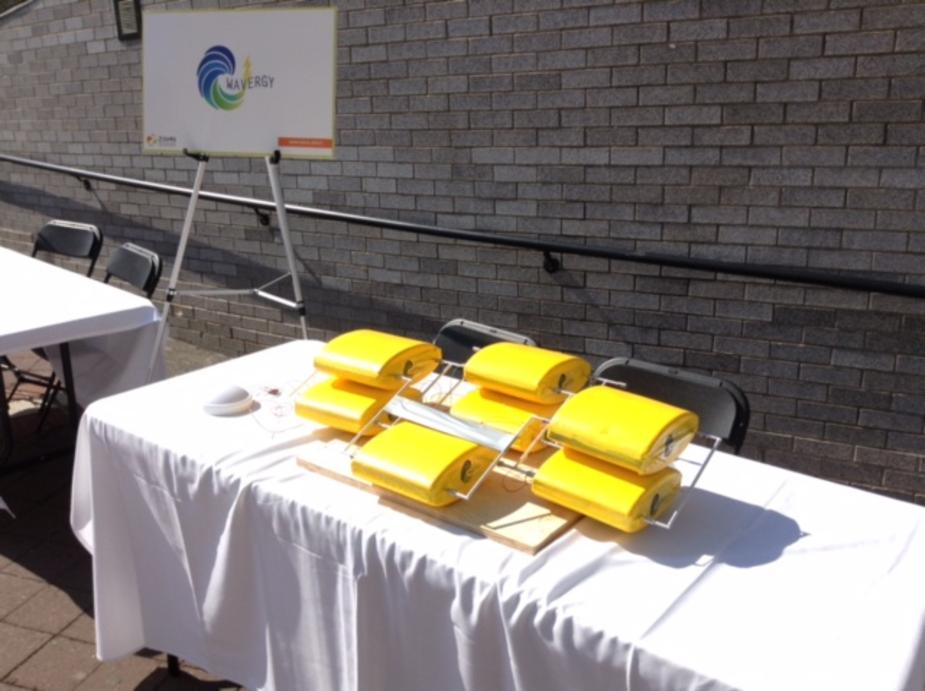 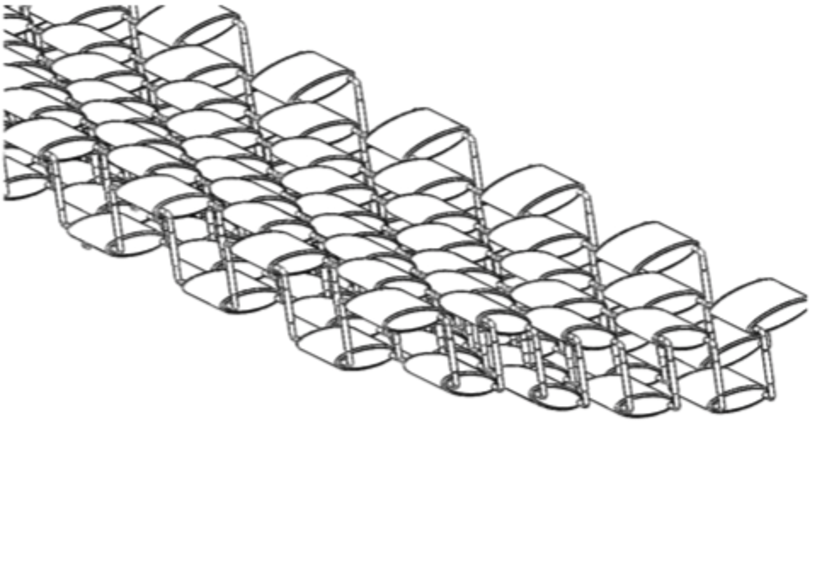 A particle of water in an ocean wave travels in an orbital motion as an ocean wave passes, returning virtually to the same point at which it started at, with very little progressive net forward translational motion.  The ocean wave’s energy is transferred through the medium of water much like energy travels through a string that is being oscillated, whereby the string itself remains at the same location but the pulse of energy is transferred along it as it is energized.  The energy available to be captured in ocean waves lies in this circular orbital motion described, originally generated by winds typically over a thousand miles away, thus its high regularity and predictability. A device that can capture and decompose a maximum amount of this motion into usable harvestable energy will gather it at the highest efficiency possible.  Our device does just that.  By flowing with the circular motion of the ocean waves, two layers of modules that mechanically interact with each other, guided by the ever-decreasing size of orbital motions at increasing depth, are able to extract a natural, continuous, highly efficient flow of energy from the endless waves passing by and through the device.

Our device, because of its interconnectedness, allows very little amount of energy to pass by without interaction with its lattice structure.  This dense configuration serves as a kind of “filter” for ocean wave energy, sifting it out of the waves without resisting its flow, and therefore requires only simple mooring to position it at an ocean location and align it with oncoming waves.  Each connection point on the device to an individual module serves as its own singular generating point with its own high-technology gear multiplication apparatus converting the two-way oscillating motion into useable transmittable energy, to be summed with the other individual generators within each module, and sent back to shore via undersea cable.  Utilizing the latest advances in frictionless gear and bearing mechanisms, as perfected in the wind turbine industry, we are able to capture a maximum amount of energy with very little loss. It is through this simplicity of design that we are able to guarantee high returns of energy without fighting the forces of nature itself, an often costly battle, but rather flowing with it, while offering the strength and resiliency to survive the industry standard 100-year storm.  Universal joints at each connection point to modules ensure that non-incident wave forces are “rolled” through the system without interfering or dampening the ability to capture all incident wave energy available.  Our system and design is not over-engineered, with solutions tacked on to accommodate the needs of the specifications.  Our device is a natural design that flows and interacts naturally with the ocean environment to capture the maximum amount of energy available, and in doing so dampen the very destructive forces of waves as they approach our coasts and metropolitan areas and infrastructure* (see reference link below).  At a power rating of 125 kW per upper module, a modest (8 over 7) 15 module array will produce 1 MW.  Expansion of arrays or array size will step up power production as needed, and/or desired. With 53 % of Americans living within 50 miles of the U.S. coasts, there is an enormous opportunity to tap this potential.  Have further questions about our technology?  Please contact us.  We’d love to chat with you about this new, ever-exciting field, and groundbreaking product we have today.